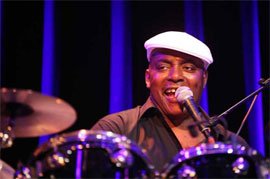 Drummer for many years and the backbone of Dr. John’s band Herman “Roscoe” Ernest was a prominent member in the New Orleans music community.

An incredibly kind man Roscoe unfortunately lost his long fight with cancer although he continued to play during his fight despite the pain. “Renowned for his larger-than-life personality, Mr. Ernest, known affectionately as Roscoe, was both a powerful percussionist and steadfast individual.

The late “diesel funk drummer” Herman “Roscoe” Ernest greatly impacted the Tulane and NOMC medical teams who cared for him during his battle with head & neck cancer. To honor of Herman’s wishes that awareness, prevention, and early detection spread throughout our community, Joyce Ernest, Herman’s widow, collaborated with the New Orleans Musicians’ Clinic & Assistance Foundation (NOMAF) and the Department of Otolaryngology at Tulane University School of Medicine to create The Herman Ernest Memorial Health Screening Initiative. The ultimate goal is to save lives through early detection.