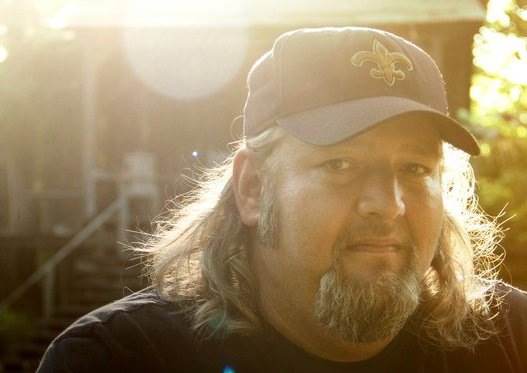 James ‘Jamie’ Galloway III, a musician and chef beloved on Oak Street, was 41 when he passed in 2012. Originally from Alexandria, Galloway made his life in New Orleans providing his friends and fans with two staples of assured happiness: good food and good music. A fiber in the fabric of the New Orleans music scene for over two decades, he played alongside Dave Jordan in the band Juice, providing harmonica, percussion and vocals.

Galloway was a bear of a man with a powerful stage presence, and a glimmer behind his eyes. His approach to harmonica occasionally reminded listeners of John Popper of Blues Traveler. But a more apt comparison would be New Orleans’ own J.D. Hill. HIs playing was nimble, often piercing, like a clarion call. His passion for living rang out; distilled in every solo.

In addition to spreading happiness through music, Jamie made sure everyone around him was well fed. Throughout his career, Galloway worked at some of New Orleans finest establishments, such as Commander’s Palace, Dickey Brennen’s Steakhouse and Jacque Imo’s. Jamie Galloway’s life is celebrated every year with the Jamie Galloway Memorial Crawfish Boil & Block Party on Oak Street in New Orleans.